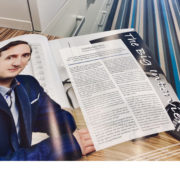 At an early age Damiano Rea realised he had won the lottery of life. Born of Italian heritage to hard working owners of an Italian Restaurant and living in Heaton, an area where he still lives and works. The restaurant was to figure large in Damiano’s early life. At age seven he was decked out in a pristine white shirt with dickie bow tie helping clear tables and run errands for customers.

“Today my parents would have been arrested for child abuse and modern slavery but back then it was common for children to help out in a family business. Working in the restaurant gave me some of my happiest childhood memories. At seven years old I was trusted, I had responsibilities and I was helping the family enterprise. Our customers clearly liked the idea too, at seven I was making more in tips than I ever did as restaurant manager in my early twenties”.

Damiano attended the Royal Grammar School in Jesmond where he studied music and quickly gravitated to the school orchestra. RGS would team up with Newcastle University orchestra playing Mendelssohn and Handel to a discerning classical music audience.

At this time a band leader called Johnny Taws was big on the north east club circuit playing big band and swing music. Johnny was a friend of Damiano’s parents and would play the piano in the restaurant with Damiano accompanying him on bass. Contacts in the music industry led to Damiano being offered a contract to tour with a professional band in Europe and South Africa.

Money earned from touring was enough for Damiano to start his property portfolio and the intention was to put his properties in the hands of a managing agent and continue with the band. But there was a problem. Damiano quickly realised there was no lettings agency in the area specialising in high-end lets for young professionals.

“In the late 90’s Heaton was still the land of the grotty student bed-sit. I had a guiding principle that still underpins our business today. We will never let a property we would not be prepared to live in ourselves. This period marked the beginning of purpose build student and key worker accommodation in Newcastle and the writing was on the wall for bed-sit land. Since I could not find an agency that shared my vision, I left the band and setup Heaton Property”.

Since then Heaton Property has gone from strength to strength, winning a prestigious Sunday Times Lettings Agency of the Year award in 2014. In addition to specialising in lettings for young professionals the agency boasts a maintenance and refurbishment team and a specialist block management division.

Plans for expansion were temporarily put on hold during the Covid-19 lockdown but even this setback had minimal impact on the business. Systems already in place allowed staffs to work from home and conduct virtual viewings employing a specialist 360 degree camera.

As we emerge from the dark days of lockdown the future looks bright for Heaton Property. Damiano concludes “It has been wonderful to watch the Heaton I love transform itself over the years. From being the poor relation of posher neighbours in Gosforth and Jesmond, Heaton is now a vibrant area with chic restaurants and speciality shops. The demographic is predominantly young professionals which means we are perfectly placed to offer them the high standard of accommodation they require. Restaurant manager to professional musician to lettings agency owner is not exactly a logical career path. But there is a common thread and one which should apply to any enterprise. A happy customer is the only customer to aim for”.